On their first day of class at UvA in 2016, a shared interest brought together two students who seemed otherwise to be total opposites. Adel Al Khozaae, a 21-year-old Communication Science student, and Dan Ungureanu, a 23-year-old European Studies student and a former DJ at the Eastern Connecticut State University WECS-FM, founded UvA Radio, fulfilling a dream the latter had had for many years.

On September 5, 2018, the students launched their first official podcast, The Pachecos, about this year’s Mexican elections. The project was initiated as a pirate radio station and podcasts were recorded with a single microphone, borrowed from a friend, in UvA’s library at Roeterseiland Campus. Now, with the help of humanities society VOX-POP, start-up incubator Venture Labs, and university staffs and students, the station has an equipped studio, a staff of 18 students including a sound engineer and a lawyer, and coverage of several topics such as news, entertainment, and goings-on at the university.

Ungureanu and Al Khozaae’s main goal is to build something for both the Dutch and international students. Paraphrasing Forrest Gump, Ungureanu describes the eclectic nature of the station that the pair is aiming for. “Life is like a box of chocolates, you never know what you’ll get,” Ungureanu said, “that’s the beauty of it… for now we just focus on getting more listeners.”

Why radio?
Ungureanu: Because when you hear something you remember it way better than when you watch it on a video. Radio sticks more into you.

What inspired the idea for a student radio?
Ungureanu: I did radio in the US. I used to be a radio DJ at WECS-FM and I always liked radio. When I came to the Netherlands I wanted to continue this passion. The idea is in a sense to bridge the gap between Dutch students and International students and to bridge a gap between faculty and students. In a sense, the idea is to create a platform for international students at UvA.

After you had the idea and the concept of the UvA radio, how did you put it in place? When?
Al Khozaae: It took like 2 years to accomplish it!

Ungureanu: I met Adel on the first or second day of classes. We started having these meetings at Burgermeester and Roeterseiland Campus and always discussing possibilities for accomplishing that idea. At that time the idea was just something in the air. However, then in March 2017 we actually started doing it with a common friend of ours, who was bringing his mic set and we were doing it pirate style in the UvA’s library at REC. Just rent a room, get a few people, get one mic and we just started practicing and trying shows.

Ungureanu: Then we did it for a while, but around Christmas 2017, it died because everyone was going home for the holidays. I lost a lot of my DJs, and the project kind of failed. Then in January 2018, I tried to bring it back to life. I always liked BG3 as a building and I always wanted to have a room in that building so I asked VOX-POP for help and they gave us a shot at their basement.

Ungureanu: Then the big point was when our old sound engineer, Jamie, provided a microphone and the tech behind it and we started recording again. I asked some of my old DJs from back in the day to come on air but only two of them agreed. Everybody else was already too busy, so we started getting new people. Then I contacted Venture Labs and they agreed to help us get some funding. They worked with the Faculty of Humanities to give us some start-up cash to buy some equipment. We got the room in August, then we got the equipment. We started doing test runs, sound checks and it worked; the acoustics were perfect. So I built the entire room in the summer alone because everyone was on holiday; I moved desks, put carpets, put soundproofing, hooked up the equipment, and by August we had our first recording. In September we started with some new DJs.

Ungureanu: We are very self-sustained. I have spent quite an amount of money already into building this station myself. The DJs have also spent a bit of their own money and not just time.

Al Khozaae: There’s a lot of effort being put into it, be it time, be it money, be it even grades.

Ungureanu: At the moment we are keeping a very good contact with the university’s administration, after all, we are using their name. However, for now, we do not intend to ask for help. We are focusing on building our image and name and getting more listeners. In time we will maybe ask for a little more support but for now, I think communication is enough.

Al Khozaae: We sent an email at the beginning because we are using their name so we wanted to clarify what we can and cannot talk about. And the answer was “we don’t care what you are doing. We don’t want to put any control; you are free to do whatever you like.”

How many students are behind it?
Ungureanu: Eighteen students, including a sound engineer and a lawyer. The lawyer is my old roommate and he is always helping me think in a legal way because when you’re doing radio there are always these things in the back which people don’t see, but that have to be done properly.

Al Khozaae: We also have a social media team that works towards expressing that combination of seriousness and entertainment.

How did you choose the students with whom to work?
Al Khozaae: At first it was more based on people we knew. Everyone brought a friend. Now we get people from our social media as well. They see our Instagram page for example and they are interested in trying. We bring them here, we ask what they have in mind we ask them to try themselves on the mics. Then we just have a conversation and decide.

Ungureanu: I think once I started looking at the financial pricing, and I contacted my old manager at my old university who has been in the business since the 50s who also said “Just go for podcasting”, then I was convinced.

Al Khozaae: Also, at the same time it was a licensing issue. That was our crisis at the time: we were only thinking about if we can license music.

Ungureanu: It’s not exactly a podcast. It is literally an old-fashioned radio station.

Al Khozaae: Old-school radio but in a modern way.

Ungureanu: With a podcast, you record on your own time, listen on your own time. Generally, people listen to media in their spare time, on the bike, on the train, etc. The idea is that we can do it in our own time constraints and they can listen to it whenever they want. If you do live, other things have to be taken into consideration, such as scheduling.

Do you plan on doing livestream?
Ungureanu: We would like to do it; we’re training for it at the moment. You have to be very fluent and know your mistakes and be in that so-called ‘zone’ in order to be able to go on live. We’re not there yet but maybe, later on, we can start doing live.

Have you considered other platforms besides SoundCloud and Spotify?
Al Khozaae: iTunes, 100%. And that shouldn’t be an issue. I am certain that we will have it before Christmas. We don’t have any other in mind for now, because these are the big three.

Ungureanu: Maybe YouTube in the future, but that is not our main aim for now.

What topics do you cover?
Ungureanu: The main categories are entertainment, communicating, and university-related topics.

Ungureanu: Also, our goal is to promote heavily on musicians in the future.

What topics do you want to cover in the future?

Al Khozaae: We would love to do more interviews. We are planning on doing an interview soon with a teacher from media studies, Mark Deuze.

What are your plans for the future?
Ungureanu: The goal is for this to become the official university station and that it will continue to be run by students.

Al Khozaae: Just to build something for Dutch and international students, give them a place where they could come, give them something to listen to.

What is your favorite thing about the UvA radio?
Al Khozaae: For me is the thrill. We are trying to build something from nothing.

Ungureanu: Being at that point of seeing a dream of mine coming true. From wanting to be in that building, to actually being in it. We started as a pirate radio station and now we’re here. 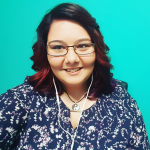