Students Break Into P.C. Hoofthuis and Wait for Their Demands to Be Answered

“Activists broke into a UvA building, the P.C. Hoofthuis, on Friday morning,” read a UvA communicate at 9:30am in the university’s website. As a result, all classes in the building before 11am were to be cancelled, and neither students nor staff members were allowed to enter. However, by 11:30am, activists remained inside, and, according to their representative outside the building, they will continue the occupation until their demands are met.

Students from the faculty of Humanities, who wished to remain anonymous, awaited in front of the P.C. Hoofthuis building alongside dozens of people to speak on behalf of these who broke into UvA’s campus earlier in the day. The P.C. Hoofthuis is the main campus for the faculty of Humanities, one of the two faculties to directly suffer from the University’s budget cuts after the government announced a 183-million-euros cutback on education. With much time in advance, students from the faculty had planned to break into the building.

“There are enough people [inside],” said one of the representative of the protesters inside the building. After the students entered in the building, it took the university one hour and a half to be informed of the occupation. Protesters asked the University of Amsterdam to go the Hague to present their demands. Among them, the activists wish to stop the student loan system and come back to how it used to be: providing monthly financial aid to student with lower incomes. “The government should stop the budget cuts on education,” said a contact for the students inside the building. “A diversity report brought out 2 years ago aimed to make UvA a more diverse, and we think UvA never did anything with it,” she added. “And they should.”

The occupation completes the WOinActie-Week, a week in which students show support to the teachers who protest against working loads and the university’s budget cuts. According to Folia, in view of this demonstration, above 30 lectures were hosted outdoors.

In addition to the unexpected occupation, a  “March of Education 2.0” is taking place today. Demonstrators will walk from Binnengasthuisstraat to P.C. Hoofthuis to protest against the budget cuts.

In the beginning, more attention was drawn to P.C. Hoofthuis. At 11am, UvA informed on their Twitter page that Geert ten Dam, president of the Executive Board, and Fred Weerman, Dean of the Faculty of Humanities, were on their way to the building to speak with the occupants. The activists did not want to spread concrete details yet. One of their representatives from the outside informed the Amsterdammer: “It is all very secret for now. The occupiers [sic] are all members of the Humanities Rally, the ASVA, the University of Colours and all different kinds of organisation,’ she said. “What we have in common is that we are unhappy of what is going on with the budget cuts and our education. This is why we are here and why we are doing this.”

In an official communication, the student association ASVA showed their support to the students. “The ASVA Student Union supports these students in their call for better quality of education, more accessible education, and inclusivity, democratisation, diversity, and decolonisation,” they said. “We assume that this time not the police, but an agreement will form the end of this occupation.” 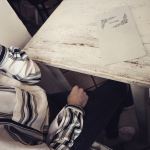