Remembrance Day, Lest We Forget

Last Friday the Netherlands remembered those who lost their lives during World War II on Remembrance Day. In Amsterdam, a large crowd gathered in Dam Square to pay their respects.

The square was at its fullest capacity just minutes after the ceremony began. The public witnessed King Willem-Alexander, Queen Maxima and Prime Minister Mark Rutte walking along war veterans and survivors.

Amongst the multitude Martin Debris, a 71 years-old professor in Groningen, reflected on the impact that World War II had on him and as an event itself: “[This event] is always important because too many people died for us, and therefore [that’s the reason why] we have to remember [them]. I was born in 1947, I know people who lost their families when I was young. I met like six families, jewish families, that never returned home. That’s why I’m here.”

Like every year, across all the Netherlands, two minutes of silence at 8pm were kept to honour and mourn war casualties. The atmosphere was utterly emotional. People sighed as they took their hats off, bowed their heads down and remained in total silence. Following the scene, the national anthem began to play.

Utrecht student Lieke Dekker, 19, believes it is important for the country to keep commemorating Remembrance Day “because otherwise we will forget [what happened].” The young man was accompanied by his mother Dorothy Janssen.

King Willem-Alexander laid down the first wreath honouring the fallen during the war, and nine more wreaths were laid by young citizens, in representation of war survivors in gratitude and the promise of a brighter future.

Lieke, 19, student at Utrecht and her mother, Dorothy, 51

Martin, 71, professor from Groningen and his wife 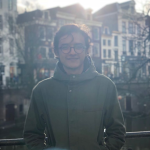