Tash Sultana: The Gender Fluid Artist Who Is Revolutionising the Music Industry

If Robert Plant and Joan Jett had a baby they would be born with a fender in its hands and their name would be Tash Sultana. One of the most up-and-coming musicians today, Sultana quickly took a gigantic leap from the streets of Melbourne to the world’s biggest stages. The artist’s concerts sell out in the blink of an eye and attract audiences of all kinds – punks, freaks, hippies, teenagers, and middle-aged moms alike. This year, the self-taught artist made history in the U.K. by being the first musician to sell out three consecutive shows at the O2 Academy Brixton – and that’s before even releasing a debut album. Last month, AFAS Live had to book an additional night in Amsterdam due to the high demand for tickets. Now that’s pretty impressive!

Tash Sultana gives me hope for contemporary music, but what exactly is so enchanting about the busker from Melbourne, what kind of sorcery are they practising? Besides being extremely badass and charismatic, Sultana knows how to write and perform real, good music. The self-taught artist plays ten different instruments, beatboxes, occasionally plays a pan flute, and sings – sometimes all at the same time. Often referred to as a “one-person band”, Sultana uses looping pedals to juggle all these incredible talents. The artist only recently released their self-produced debut album “Flow State” which is composed of soulful lyrics, raging guitar solos, and jazzy vocals over reggae beats. “Flow State” is not an ordinary record, it is an explosive audible experience that combines and messes around with music from anywhere and anytime.

The 23-year old artist identifies as non-binary and became a YouTube sensation after posting a home recording of the single “Jungle”. Overnight the video went viral and has reached 26 million views and counting. The mise-en-scène of Sultana’s shows resembles a psychedelic movie set. This was especially evident during last month’s show at AFAS Live’s giant concert hall. An altar with Himalayan salt lamps was brought out before Sultana entered the stage barefooted, ready to fully immerse themselves in their upcoming performance. But first, there are three rules that the musician sets for their shows: “If you are homophobic, racist, or transphobic, get the **** out of here!” After this fair warning, the show begins. Tash Sultana’s stage presence is so intense and unpredictable that the audience is taken to a whole new dimension. We cannot tell if Sultana is completely improvising or if they plan any of the performances. Either way, Sultana hypnotizes the audience by letting every note resonate through their face and body.

By the end of a two-hour performance, thousands of people often leave baffled, unsure of what they had just experienced. As someone who went to her first concert at the age of seven and who grew up in a household filled with musicians, I could not believe my eyes nor ears when I saw Sultana that Sunday night at AFAS Live. For all of you that are curious and want to experience that feeling too, Amsterdam is bringing Tash Sultana back, this time to the Ziggo Dome on July 6, 2019.

Tash Sultana is one of a kind, the role model we need in today’s over-commercialization of music, of deeply unpoetic lyrics, Instagram-obsessed fakes, and frankly, lousy strumming. Sultana is raw, outspoken, and always makes sure to address pressing issues like mental-health in interviews as well as on-stage. While being admiringly open about their daily struggles with mental issues, the musician encourages those who are struggling to see a therapist but to also find a passion and begin to heal by fully immersing themselves into it. Music saved Sultana’s sanity – and their music is saving many others. “You are medicine!” I heard a woman yell during the show in Amsterdam. Sultana smiled with gratitude.

Kate Shylo is a master student at the University of Amsterdam. The views expressed here are not necessarily those of The Amsterdammer. 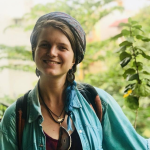