The epitome of dramaticism:

The last two weeks have been a rollercoaster of emotions for football fans. After the result of these semi-finals, there is a unique winner, and it is not England – but the game itself. The world just experienced the best set of semi-finals in the history of the UEFA Champions League. On this occasion, controversy regarding referee calls did not play a leading role. Both games were dramatic yet fair – it was football at its finest.

The present state of football is undeniably fronted by two figures: Lionel Messi and Cristiano Ronaldo. These superstars are the only active players to have scored 600 goals in their careers. Both athletes are a reflection of the present era of the sport – a time where the individualistic behavior of the players is celebrated, awarded, and sometimes demanded. It is refreshing for football to have two teams lacking superstars push their way to the final.

It is clear that European football has been deeply set under a monopoly of Spanish teams. Since 2006, Barcelona and Real Madrid have won four Champions Leagues each, including the last five. Now, all of a sudden there is an English final. Yet, I do not believe it is the end of Spanish championship wins – Barcelona and Real Madrid will come back stronger with new signings. However, I do believe the competition has risen: The Premier League has two teams with more than 90 points this season, English teams have shown they can beat anyone in Europe, and Ajax players will be big stars on their future teams. All in all, the future seems bright for football.

The knockout stage of this Champions League has been probably the best yet, and the semi-finals epitomized this, although there were two different stories. Throughout the season, it seemed impossible for any team to go to Camp Nou and beat Barcelona in the Champions League. Hence, after Barcelona was graced by Leo Messi’s strong performance during the first leg of the semi-finals, they were up 3-0 against Liverpool. However, it was a totally different story on the second leg of the match. Barcelona fans watched for 90 minutes as their team slowly died. Being unable to react, fans were helplessly watching their team fade while subconsciously replaying last year’s game against Roma. Liverpool, without superstars, managed to beat Barcelona and reach a consecutive – well deserved – European finale. On the contrary, it seems like Barcelona’s problem is a mental one. They don’t lack talent, players, or resources, yet their performance level radically drops in decisive games. Hence, if Barcelona is unable to train and develop their mental strength, we won’t see Messi lifting the cup in the near future.

On the other hand, Ajax’s story was heartbreaking. The Dutch team was at its best possible level playing away with their 1-0 lead against London on the first leg. On the second leg, Ajax scored two more goals – putting them up 3-0 at half time. Then, in the second half, Spurs tied the game in less than 15 minutes. After that, there was a plethora of emotional and dramatic attacks for both teams. Nonetheless, in the last minute of five added by the referee, Tottenham Spurs snatched Ajax’s dreams of heading to the Champions League final. No one would’ve been able to write such a hurtful story beforehand. The streets of Amsterdam were filled, yet silent. The young stars of Ajax will shine in the future, and wherever they go, we will hear from them. For Tottenham, it’s the first European final in their team history and the dream is still alive.

Now here we are, with an English final in Spain. Liverpool and Tottenham managed to make it to the final, both teams play with great talent, a big heart, and bigger cojones. It has been a wonderful trip and one of the most exciting tournaments in the history of football. Finally, (I never thought I would say it for this year’s Champions League), but ladies and gentlemen… “It’s coming home.”

Emilio Gutierrez is a student at the University of Amsterdam. The views expressed here are not necessarily those of The Amsterdammer. 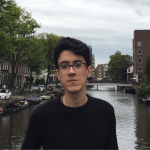