Becoming: Intimacy At Scale and In Style

Leaving the best for last, Michelle Obama finished the European part of her book tour in Ziggo Dome, Amsterdam. The former First Lady of the USA shared her life story, reflecting on the experiences that shaped her professional, public and private life. The audience got to hear stories about Obama’s childhood on the South Side of Chicago, her years as an executive and a new mother as well as her time on the campaign trail and in the White House. With over 10,000 people in attendance, the Becoming: An Intimate Conversation With Michelle Obama tour delivered what can only be characterised as intimacy at scale and in style.

Before Michelle Obama arrived on stage, the audience watched a video of her on-camera highlights. Here, a collage of the former First Lady through the years is depicted. Eva Oravcova / The Amsterdammer

To clarify, this tour is not Mrs. Obama’s attempt to kick-start her political career. She has been clear that she has no love for politics and no interest in running for office. Instead, this book tour is a way for her to share her truth in an ‘intimate conversation’ with thousands of her closest friends. “I don’t know how to be any other way, other than truthful. Sometimes it gets me [in] trouble,” she said laughingly, at the beginning of the evening. She then proceeded to tell the audience stories of the times when her honesty got her in trouble, or when her voice was her most valuable tool and even of times when she was asked to stay quiet.

The event was set up as a conversation between Michelle Obama and Isha Sesay, a former CNN journalist. The theme guiding Sesay’s questions was Obama’s personal journey, as described in her bestselling book Becoming. When asked about her process of writing her autobiography, Obama laughed, “It was partly an assignment, since every First Lady is to write some version of their time in the White House.” She continued by explaining that she wanted it to be more because “to understand Michelle Obama, you have to understand the little girl Michelle Robinson from the South Side of Chicago.”

The conversation took the audience on a journey of Obama’s life. She reflected on these experiences and emphasised on what she had learnt from them. “I want kids of all kinds out there, women, kids of all colour and working-class kids to understand that it’s all a scam. That notion, that doubt that they try to put in your brain that you somehow can’t sit at the most powerful seats and compete.” She continued: “I just want young people to understand, you belong there. Do not let somebody set your bar lower than you think it should be for you!”

Mrs. Obama also delighted the audience with her comedy chops, especially when talking about her husband. “I thought I could plan my life and the plans would stick … and then I met this guy, Barack Obama.” She opened up about their relationship; about the good, the bad and the ugly because she wanted young people to know that marriage is hard and that there is no such a thing as a perfect relationship. “You see couples that you love, and you see Bey and Jay (referring to Beyonce and Jay-Z) and you see Barack and Michelle and you think ‘I want that kind of love’ hashtag #relationshipgoals.” She continued as the audience laughs: “All they’re seeing is us on stage going ‘love you boo’ and so on, but they don’t see us when we are going off stage and I’m trying to push him off stage because he did something that was really irritating. I don’t think it’s fair for us to only show the good side.”

Whether Obama spoke about her marriage, her years spent at the most famous address in the world or the current US political landscape, she stuck to her famous motto no matter what: “When they go low, we go high!” Abstaining from addressing the current US administration directly, she talked about the importance of acceptance and authenticity. “We need more stories out there of how to be human, not fewer. We need to expand the possibility of what it means to be human, not narrow it down to just few races and genders.” Obama explained that telling her story was unexpectedly empowering and she offered some last words of wisdom: “Dare to be vulnerable! That is how we find strength, that is how we become.”

On April 17, over 10,000 people gathered in Ziggo Dome, Amsterdam to attend the event Becoming: An Intimate Conversation With Michelle Obama. Here seen waiting in anticipation for the guest of honor to arrive. Eva Oravcova / The Amsterdammer

With over 10 million copies sold as of now, Obama’s book is on its way to becoming the bestselling autobiography of all time. The tour has not only mirrored the book’s success in terms of demand, it has also changed the meaning of what a book tour is. As New York Times pointed out, even promotional tours for highly successful publications generally consist of podcast conversations and some version of small-scale interviews. Stating that Obama’s tour deviates from this formula would be an understatement. Becoming: An Intimate Conversation With Michelle Obama has 21 stops in total, including sold-out venues with up to 20,000 seats. It was organised by Live Nation, the largest concert promoter in the world. For a better understanding, Live Nation manages concert tours for artists such as U2, Beyonce and Ariana Grande, just to name a few.

The investment towards creating an experience for the audience was evident throughout the event, with visual aids, graphic design and soundtrack. As the attendees started to enter the hall, a video of Michelle’s on-camera highlights was playing on the big screen behind the podium. The content ranged from her meetings with foreign leaders and military personnel, to her appearances on talk shows and even her push-up contest with Ellen. The video also included short interviews with the former first lady’s closest family; her brother, her mother, her daughters Sasha and Malia and her husband as they reminisced about their memories with the guest of honour. In the background, social media posts from the attendees of the event were shown on a big screen, with the hashtag #IAmBecoming. When the event officially began, Michelle Obama entered the podium in a rock star-esq fashion, with Alicia Keys’ Girl On Fire blasting through the speakers in the hall and the audience giving her a standing ovation, indicating how much she meant to them rather than just the wife of the 44th President. 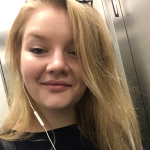