This edition of Sonic Acts Festival surprised the public with a new, powerful theme: Hereafter. At its 25th edition, the four-day festival (February 21-24) was not a nostalgic union that stuck to the past; instead, it embraced important matters surrounding humanity’s current global crisis and the origins thereof. The annual festival is, as its name suggests, centered around sound in art, but Hereafter branched out into a wide variety of areas, from art to performance to lectures. By gathering a variety of artistic acts that speculate about the future, Hereafter took into consideration different perspectives on bringing awareness to practices of mutual support in order to deal with an ever-changing digital world that is surrounded by capitalism.

Friday, February 22, the second day of the festival, brought forward important talks that tackled the subjects of life and death. After the thoughtfulness with which the day began, the programme ended with four sound art explorations at the Stedelijk Museum which allowed the participants to be part of a self-exploratory journey.

Logic of Death, the first part of the conference, was about questioning, and finding solutions to, the crises that the planet is going through at the moment. Since death comes as a taboo subject in our society, both of the lecturers, Rosi Braidotti and Rick Dolphijn from Utrecht University, took a stoic perspective on matters such as power differences between the living and the dead, endurance, exhaustion, necropolitics, the infinity of art and our aim of survival.

What stood out during the lecture were the small but difficult changes in gestures that Braidotti proposed. If people want to oppose capitalism, being proactive and getting rid of old mindsets were some of the professor’s recommendations. In the question and answer session, she explained that “it is that gesture that you need to acknowledge, the extent of something that hurts.” Giving the example of how the ocean’s acidity is expected to rise to an irreversible state in twelve years from now on, Braidotti encouraged her listeners to position themselves and see “the possibility of endurance (…) by learning to live with zero growth, learning to desire poverty instead of desiring growth and more consumption”.

Dolphijn, focusing on the artistic spectrum, questioned, “What of art belongs to the present?” His talk revolved around the necropolitics of art by taking into consideration the peculiar subject of quasi-objects. What he explained is what they do with the present, how they move us and how they help us organize the world. Artworks are “mixed with quasi-objects,” but in the end, what strikes us as distinct and special to art is the fact that it “refuses to be embedded in the present.”

Marking the transition from morning to afternoon was the beginning of the Logic of Life event, the second part of the conference. This event saw German artist Susanne M. Winterling and researcher and director of the Center of Philosophy at Free University of Brussels Didier Debaise both present their respective works. This magnetizing afternoon session questioned life’s worth from various angles.

Hereafter at the Stedelijk Museum

For Sonic Acts Festival, the Stedelijk Museum’s main hall was transformed into an area of musical experience. Seats were placed in multiple circles, surrounding The Pentacle: 15.3 Surround Sound System, in which give artists played a range of musical works. The novel seating arrangement allowed the museum’s visitors to explore music and noises in a distinctive manner. The artists that played were Fedde ten Berge, Nina Pixel, Ji Youn Kang and Hugo Esquinca.

As the music filled the space, many of the audience closed their eyes in order to grasp and translate the sounds for themselves. One of the spectators, Jooyoung Park (26), a Korean Interaction Design student based in Delft, was standing in the front row, carefully listening to Ji Youn Kang’s work. She mentioned that the reason for attending this particular event was her and Kang’s shared Korean nationality. Furthermore, she fully enjoyed Kang’s performance because her music “has ups and downs” and it tells a story that “gets to a climax,” in her words. “That those kinds of elements [that she uses] reveal how people view the [Korean] society and how people act and behave.” Connecting the whole experience to both of their cultures, the event proved not just personally relatable but also a way to discover how sound moves us in time and space. 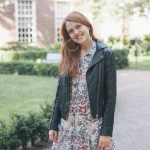