The Amsterdam Magic Show: Closing Off Their Third Year and Excited for What the Future Holds

Last Tuesday, this year’s final performance of Amsterdam’s Magic Show (AMS) took place at Boom Chicago. The event, which counted with the presence of approximately 180 people, closed off with what has been their third year on stage since Alex Blackwood, a known Irish magician, developed the project in the Dutch capital.

True to their slogan, “Things that make you go huh?”, the show aims to take the audience through what the team likes to call “the rabbit’s hole in Alice’s Wonderland.” “We live in a technologically advanced society, so anything you want to know is one click away,” commented Fritz Alkemade, famous Dutch magician and Blackwood’s associate, “[The show is a place where] you forget everything and see things that are still impossible, but not knowing can be a good thing,” Alkemade adds.

Both Blackwood and Alkemade describe the creation and initial development processes of AMS as easy. In fact, they recall it as an “instant success,” because even from their very first performance back in 2016, every date has been sold out the weekend prior. “Then it became harder,” says Blackwood. “Your family and friends have already seen it and you want the performances to be more developed to keep on reaching new audiences,” he adds. That is why it is crucial for Alkemade, as the show’s artistic director, to have a diverse array of performances, but this comes with certain difficulties.

The core group, which is constituted by six international magicians who specialize in different practices, is constantly encouraged to develop and change the performances to keep the show contemporary. However, this makes AMS hard to tailor into a cohesive production. “It is the same when you go to a theater, you want to have a story. It is hard to make everything relate without interfering with the artistic freedom of the magicians,” comments Alkemade.

Yet, at last, Alkemade and Blackwood agree that the time and processes invested in the project have paid off, creating a comfortable and engaging show. As Alkemade puts it: “the magician’s community is small, but [we are] a friendly bunch,” and that same interactive and friendly environment has been reflected into the audience. “From the moment you turn the corner and see the door of the theater until the moment you leave, it should be a party. That is why you have the magicians greeting you at the entrance and we take breaks throughout the show. It all makes it more personalized,” says Blackwood. Alkemade adds that this is easier to do in Amsterdam, an international city, as magic is an international language that transcends all barriers which allow locals and tourists to “detach from the world and sit down to enjoy the show without trying to figure it out.” 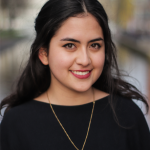 19-year-old Ecuadorian Communication Science student at the University of Amsterdam. I have lived in Ecuador, Argentina and now, The Netherlands. I have a deep interest in photography, painting and writing.