The modest pop-up performance of 10 cellists at the Amsterdam Central Station is just a small taste of what the Cello Biennale 2018 has in store for people of all ages and with all interests. Among young cellists from Students Around the World, cello legends and cello builders come together to celebrate the power of the cello.

At 4 p.m. on Monday, the hypnotic sound of 10 cellos filled the main hall of Amsterdam Central Station. Amid a swelling crowd, nine students from three European cities surrounded cello-extraordinaire Giovanni Sollima, who practically danced as he played through the seven modern compositions. The group is part of the European collaboration “Music Up Close Network” and is now in its third year of running. The collaboration unites young people with new forms of classical music. This year, it brings students from Het Nederlands Philharmonisch Orkest (Amsterdam), the Accademia Nazionale di Santa Cecilia (Rome, Italy) and L’Auditori (Barcelona, Spain) together, to perform at the Cello Biennale, which is running from October 18 until 27 in the Muziekgebouw aan ‘t IJ and the Bimhuis in Amsterdam. This year’s theme, is the power of music and the power of the cello.

This pop-up performance is just a hint of what the rich variety hosted by the 2018 Cello Bienniale, will offer. Over one hundred events boast a jam-packed variety of performances, collaborations, masterclasses and talks. Internationally acclaimed cello players like Sollima, who teaches at Rome’s Accademia Nazionale di Santa Cecilia, and is praised by the Cello Biennale as “undoubtedly the most energetic cellist ever” will be performing. The Cello Bienniale promises to be an enriching and busy week!

Featured several times in the programme, are concerts from “Students Around the World”, exhibiting a range of music schools, free at the Bimhuis. On Tuesday, they hosted students from Hochschule der Künste, which is located in Zurich. The room was bursting full, with many people standing on the side to enjoy the expressive and rich rendering of Bach’s Inventions and Sinfonias. Working with impressive spirit and synchronisation, the group is worthy of its big audience. Among the nine students performing is Kristína Chalmovská, 28, who has been playing the cello for 24 years. It is her first time at this biennial and she found it “a good opportunity to see the music and meet all the cellists.” Performing alongside her, fellow student Javier Lopez Escalona, 21 years old, is also enjoying his first visit to Amsterdam’s Cello Biennial after hearing about it for the first time when he was 14. “I found videos of the Biennial on YouTube, and now I’m here,” he smiles. The group’s teacher, the Belgian Roel Dieltiens, has attended every Biennial since the its birth, and this year he is a guest artist, running a masterclass on October 26, and bringing his class from Zurich to perform. The group have had a busy week: prior to this, they were playing in Belgium and Switzerland, but Escalona seems upbeat, “We are really happy to play. We are really liking it.” He assumes that they will do more with this programme, which they’ve been preparing for almost three months, “when you’ve put this much work into something, you have to play it and enjoy it”  he says.

The audience certainly enjoyed it; including Ines Iglesias, 23, who is from Spain and also a first timer of the festival, stopping by after a cello audition. Sophie Ehling, 25, from Groningen, who is here for the third time, is volunteering at this event for the first time. They are both enthusiastic about the master-classes offered during the festival by famous cellists, which is a treat for any cello enthusiast. “I love it!”, Ehling tells me, sporting a trendy ‘Cello Biennial’ T-shirt. She was particularly impressed by the competition she watched on October 22. She recalls how impressive the technically demanding nature of the audience was: “with every candidate, the audience reacted in a different way … some people managed to get the audience super quiet, and it was amazing to see that.” She also noticed the  wide range of audiences and participants at the festival or children’s events – for example, the “Hello Cello” that attracted a lot of families. Indeed, the scope of attractions is fantastic, with something for everyone. From ‘Breakfast with Bach’-sessions, where you can start your day with a croissant and some live cello, to night sessions and talks about music, the Cello Biennale offers a cello enthusiast anything they could possibly want. People armed with wine glasses and cello cases meander through record, CD and merchandise stalls in the Bimhuis lobby which is alive with an apt buzz.

Amidst this scene, a unique performance takes place, as artists Tanguy Fraval and Gudrun Kremeier build a cello right before visitors’ eyes. When they aren’t working furiously to fix cellos for artists performing at the festival, the pair work on producing a cello between them. Such has been the tradition at the Cello Bienniale over the years, and this is the third collaboratively built cello Fraval has worked on. It takes two experienced cello builders and three weeks of working tirelessly to make a cello for this event – a rapid change in pace from for his usual work where he might take up to five months for one instrument. As he is approached, he fixes a cello which he made for one of the performers back in 2011. While showing the panes of spruce and maple with which he will build the cello, he explains why he enjoys and is enlightened by the process, as he and his collaborator get to “share tricks” with one another. It is a difficult operation however, and he describes how having an audience is sometimes hard: “we need to focus on what we do.” Then he grins, “its part of the pleasure, and part of the mission.”

Back at the Central Station, the pop-up performers packed up their instruments to continue their trip around Amsterdam’s underground. Next, they’re heading to Vijzelgracht metro station to perform a song by the late Dutch singer Ramses Shaffy, next to his portrait displayed there. The organiser of the event, Iris Oltheten seemed pleased with how the day was going: “It was great!” she says, “so many smiling people around us. I’m very happy.” Somilla, 55, seems pleased as well. He will perform during the festival, before going straight on his tour around the Netherlands with Holland Baroque from October 28, where he will be playing in Heerlen, Utrecht, the Hague and Zwolle. For now, onto the next subway station – but not without getting a beer on the way, he promptly adds. 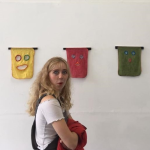