Over 500 students and staff-members took the streets last Friday during the March for Education. Participants demonstrated against national budget cuts on higher education.

The rally was the result of a union between the Humanities Rally UvA, the New University (NU), the ASVA student union and organisations in Groningen, Utrecht and Nijmegen. Overall, protesters asked for democracy, a fair funding structure, diversity and for the budget cuts not to affect the quality of education.

Protesters marched from Oudemanhuispoort to Roeterseilandcampus, where some set up their tents outside the campus. However, the demonstration was stopped at night, where the police evicted dozens of students. According to witnesses, many student were injured in the process. Protesters asked UvA President of the Executive Board, Geert ten Dam, to provide an explanation to the police intervention.

Rosanne Beentjes, a sociology student at UvA, believes the march aimed to draw attention on the issue and involve more people to the movement. “I hope this will become a broader movement in society,” Beentjes said. Like the 23-year-old student, protesters believe the march would be a way to raise awareness on the issue no only at an university level, but in society as well. “Maybe we can make it broader than only this student movement,” Beentjes explains. “I think there are a lot of capitalist and neoliberal influences in society […] and corporate businesses are really having a big influence of what’s going on in society and this is really an example of this and it what is happening at the university.” Indeed, the march has been covered by important news media such as Vice, De Telegraph, Het Parool and NL Times.

Participants claimed that students from faculties other than the one of Humanities and Social and Behavioral Sciences should be equally concerned about the changes. “I am a humanities student and this kind of policy will gradually take away the funding from the whole [degree] because there’s […] the whole idea about reducing courses and programmes, so that’s going to affect everybody” said Parvez, a 32-year-old literature and cultural analysis student at UvA. “Maybe it’s not gonna affect [me] while I am still a student, but future students will be affected.” Indeed, after the government announced  cutbacks of 183 million on higher education, different sectors of the University of Amsterdam were announced to be directly affected. In an email sent to the student of the Humanities and Social Behavioural Sciences faculty, a decrease in tutorial hours and in amount of lecturers for next year were announced.

In 2015, students occupied the Maagdenhuis for over a month to protest similar issues. Doubt persists among people who wonder if the efforts will lead to a change this time. For Parvez, they will only get to make a change if they continue to raise awareness. “My personal experience tells me that no movement can succeed with one or two events,” he explains. “Back there (in my country) we’ll get beat up, with teargas and stuff […]. This (protest) is in that way much better, you can protest, negotiate and be democratic about it.” 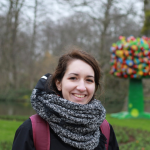 6 People reacted on this